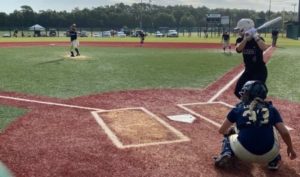 For the first time since its inception, Dan Burns’ competitive and exclusive IDT event in Boulder, Colorado was cancelled this year, yet another victim of the pandemic sweeping our world. This cancellation left a number of solid softball teams without an event to attend.

The cancellation turned into an opportunity for Jason Gusaeff, of The Softball Kingdom event company, who got a call from Bill Conroy of the Beverly Bandits organization, looking for a place to play after IDT was off the table. The call came at the beginning of June and Gusaeff knew that with Florida open for business, getting the Champion’s Park venue wouldn’t be a problem.

In fact, he filled the park in June when Scenic City was cancelled, gathering 66 teams in four days and hosting an event he called “incredibly successful.”

Gusaeff teamed up with Florida PGF Director Bill Hoopes to run the June event, and they partnered up again to host the Independence Day Invitational, gathering Southeastern-based teams to fill the field. 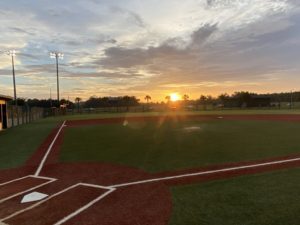 Sunset from the Championships Park Complex, site of the PGF Independence Invitational.

Champions Park is a 16-field complex spanning nearly 200 acres in Newberry, Florida, just 30 minutes from the University of Florida’s main campus. All of the fields are turf with grass outfields.

To combat the COVID situation, some restrictions were put into play. Each team was given game balls at the beginning of the game, and those were the balls that team would use on defense for that game, limiting the exposure for the players and officials.

Fans were not permitted to be along the fences at the baseline, allowing for only a scorekeeper and videographer per team to be in the backstop area. Fans were permitted to park vehicles at the outfield fences and many parents and fans watched the action from their cars, truck and SUVs.

In all, 42 teams competed in the event, which was organized in a similar format to the one IDT employs: five pools games feeding into a single elimination bracket play event. All of the games were 7-inning format and Gusaeff made an effort to keep the event budget friendly for the already-stressed travel ball families: there was no gate fee, coolers were allowed, there was not a stay-to-play mandate, and the entry fee was low for an event of this type.

While other events were unfortunately cancelled nationwide, the IDI drew in top teams looking for top competition: the Georgia Impact, Birmingham Thunderbolts, Tampa Mustangs, Gainesville Gold, Beverly Bandits, and Firecrackers organizations each sent multiple teams to compete against the high-level squads set to play in the Independence Day Invitational.

“The event was a success,” said Patrick Lewis, head coach of the Georgia Impact Premier Lewis team and eventual event champion. “This is something we will continue to do in the future, but on an off weekend from IDT.” 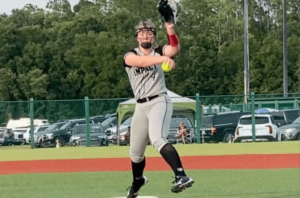 The Georgia Impact organization had several standout teams and players in the event. Pictured above: Emmah Rolfe of the Impact – Jeffreys team; she’s a 2022 commit to Auburn.

Gusaeff agrees. The weekend of the IDT event is sacred to him, but having the top teams face off in Florida was something he would “love to do again, but we would have to find the right time.”

Lewis’ team was Guaseff’s odds-on favorite to carry the 18U division, and after a tight game against the Gainesville Gold—sporting many collegiate players who were still age-eligible—Lewis didn’t disappoint. They were coming from an extra-innings, runner-up finish in the Top Club Nationals in Oklahoma City and were firing on all cylinders.

“Bailey Dowling has been amazing defensively and offensively,” Lewis said. “Taylor Tinsley and Alex Salter have been lights out in the circle. Dallis Goodnight in the leadoff role really gets us going.”

It was a great event for more than one Georgia Impact squad, with the Georgia Impact ‘04 Jeffreys/Townsend taking the win in the 16U age group, coached by former UAB Head Coach Marla Townsend and Impact co-founder Rick Jeffreys.

Beverly Bandits had the 14U age group won from the semis, as both their Premier Harkness/Christopoulos and Yates teams advanced into the championship game. The Harkness team came out on top, posting 9 runs to the Yates’ 2.

“It was a great event,” said Bill Conroy, head of the Beverly Bandits organization. “It was good to see both of our 14U teams play each other in the championship.”

While the NCAA Dead Period was in effect, there were several D3 and junior college coaches roaming the property, making notes on players, and taking in games. 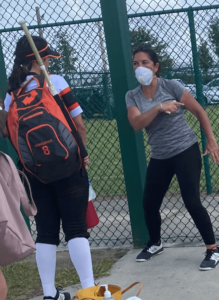 Head Coach Jen Tyrrell of the Beverly Bandits Premier 16U team following safety protocols. with one of her players.

Backstops were loaded with cameras and cell phones, streaming the games on platforms from Periscope to Facebook Live to AthletesGoLive. Some teams even had parents calling the games to help viewers stay current with the action.

The pandemic continues to challenge sporting events across the country. “

The biggest challenge has just been the unknown,” Lewis said. “Not knowing exactly where we will play or when we will plan. We are still finalizing plans to end the summer.”

As curveballs are thrown into sport, Gusaeff and his team continue find ways to serve up team-centric events that meet the needs of organizations, players, and parents. 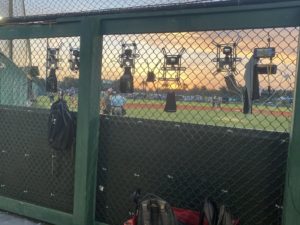 The view from behind from the Georgia Impact backstop where cameras were hooked up to live stream the games.