GREEN COVE SPRINGS – The Sunshine State Games Alachua and Clay County Festivals came to an end with two of the most inspirational accomplishments of the weekend at the Stephen C. O’Connell Center Natatorium, in Gainesville.

The final Team Free performance of the Novice Division, was a seven-member Athletes With Disabilities team representing the Miramar Mermaids (pictured above).  The team, all with Down Syndrome, performed a just under two-minute routine to the song, “Sugar, Sugar,” by the Archies.

The team, ranging in age from 16 to 26 consisted of Bianka Almodovar, Maeve Chiche, Grace Long, Caroina Rossel, Sophia Valdivia, Valeria Van Balen and Valeria Vazquez, who all reside in the Miramar and Miami area.  The Mermaids are coached by Isis Sanchez.

The Mermaids is a 35-member club with eight AWD athletes. They are the only AWD Artistic Swim Team in the country, according to Noriega, and are assisted by the Down’s Syndrome Association of Miami.

“We had to bring this team to the Sunshine State Games,” said Noriega, who has been involved with the Games for several years and served as a judge during the event. “We had to show the state we are here.”

Following the team’s routine and the loud ovation from the crowd at the O’Connell Center, Coach Isis Sanchez, assessed their performance.

The Mermaids were followed by an Open Team Free Routine by the Lakeland YMCA Flamingos team, with athletes between the ages of 60 and 80, including the Games Artistic Swimming Sport Director, Lorraine Valerino.  Also among the five-member team is 80-year old Laurel Cain, Lynn Heil, Kathy McDaniel and Piper Mislovic. The team hopes to compete in the USA Artistic Swimming National Championships in Las Vegas, in October.

El Nino is coached by Adam Smith, from West Palm Beach, who also occasionally inserts himself into the lineup.  The 53-year old Smith plays on the team with his 19-year old son, Charlie.

While many sports of the Sunshine State Games have parents competing with their children, it’s not something usually found in Ultimate, a sport that requires constant running up and down the field, comparable to soccer.

“It’s very rare in Ultimate for a father and son to be playing together,” said Robbie Dennis, who coaches the team along with Smith. “But look at him, he’s in his 50s and keeps up.”

Adam has been playing Ultimate since he was in high school in Miami and played with a team at the University of Florida, where he graduated in 1985.  Charlie just completed his freshman year at Tulane University, and has been a member of the El Nino team for the last four years.

Adam normally plays with a 50 and over team, but joined the team on the field for their gold-medal winning performance this weekend.  “Most of the tournaments these guys play in, I can’t keep up.” He said. “I can play at this level.” 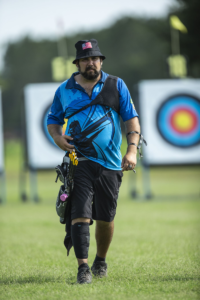 Over 100 archers were pulling back the bow and shooting for the yellow circle on the target at the Easton Newberry Archery Center and Gator Bowmen in Alachua County.

With archers ranging from nine-years old to into their 80s, the sport is thriving with youth programs and bringing younger shooters to the Sunshine State Games.

On far side of the shooting line was nine-year old Dominic Tolentino, from Clermont, who was shooting with his 18-year old brother, Fher.  Both were introduced to the sport by Peter McCormick (pictured above), through the Olympic Archery in Schools (OAS) program.

McCormick, who teaches engineering classes at East River High School, in Orlando, was at the Easton Newberry Archery Center with nine members of his OAS program.  A recent graduate of East River High School, Willard Scammey, also joined the group, with others who have come through McCormick’s program and graduated from the school.

Besides his teaching duties in engineering classes, McCormick also teaches two periods of archery a day as a physical education instructor. East River High School competes in a 10-school conference with other Orlando area schools to further spread the sport of archery.

“There are two middle schools with OAS programs that feed into East River High School,” McCormick said.  “Once those students move up to high school, they can continue in my archery classes.”

The Pickleball Mixed Doubles 50-54 age group gold medal came down to teams playing against one another who were men’s and women’s doubles partners on Saturday, at Ronnie Van Zant Park, in Green Cove Springs.

Eric and Jennifer Latak, of Jacksonville, won their six pool play matches, with only two of their opponents reaching double digits in the 15-point, single-game format.  The closest game of pool play came against their partners from Saturday, and silver medalists, David Hartsfield, of Jacksonville, and Lisa Deister, of St. Johns, a 15-12 win for the Latak’s.

The 42nd Annual Sunshine State Games continues the weekend of June 26-27 with the Water Polo Championships, to be held in Fort Lauderdale. Registration is currently open with information at www.sunshinestategames.com/water-polo.

The Sunshine State Games, Florida’s only Olympic-style Sports Festival, is presented annually by the Florida Sports Foundation, the official sports promotion and development organization of the State of Florida. The 2021 Games are presented in conjunction with Clay County Tourism and Airstream Ventures, the Gainesville Sports Commission, Florida’s Sports Coast and Polk County Sports Marketing. The Sunshine State Games is part of the state’s $57.4 billion sports industry that accounts for 580,000 jobs statewide.

The Florida Sports Foundation, a 501(C) 3 non-profit corporation, is the official sports promotion and development organization for the State of Florida. It is charged with the promotion and development of professional, amateur, recreational sports, and physical fitness opportunities that produce a thriving Florida sports industry and environment. With a seemingly endless list of sporting ventures and venues, the Florida Sports Foundation strives to promote Florida’s unique sports industry. The Foundation’s staff is dedicated to serving the needs and interests of Florida’s sports community and assists with all questions concerning Florida sporting activities and issues.

About the Gainesville Sports Commission